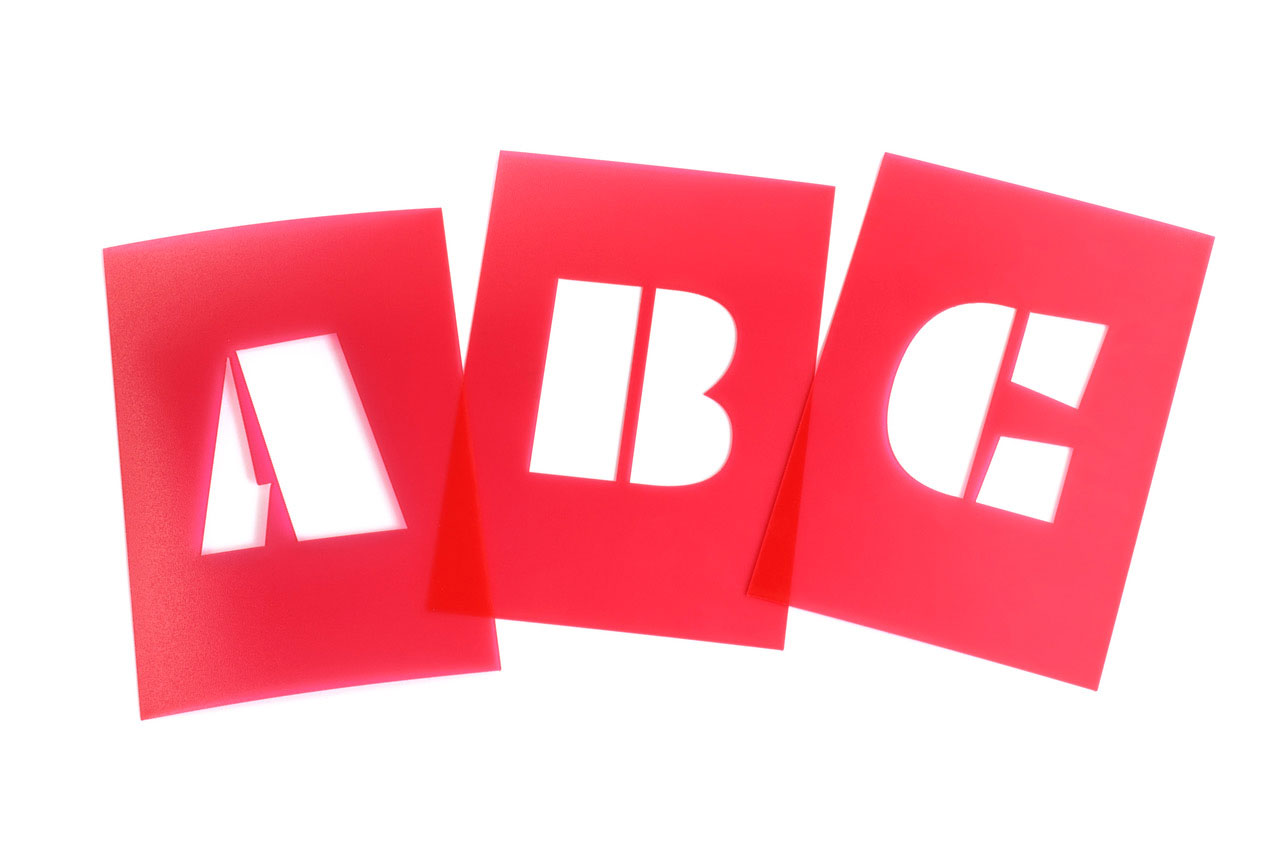 In the year 2022, printed type specimens are no longer a matter of course. But print has other specific qualities that a digital type specimen cannot have, and besides, it brings us great pleasure to make it. Earlier this year we made the Manicule Specimen, a printed publication which contains an overview of various fonts from our catalogue. A printed type specimen of the Plakato typeface family, however, requires a specific approach, one that is quite obvious. There is only one way to present a stencil typeface properly: with a stencil set. 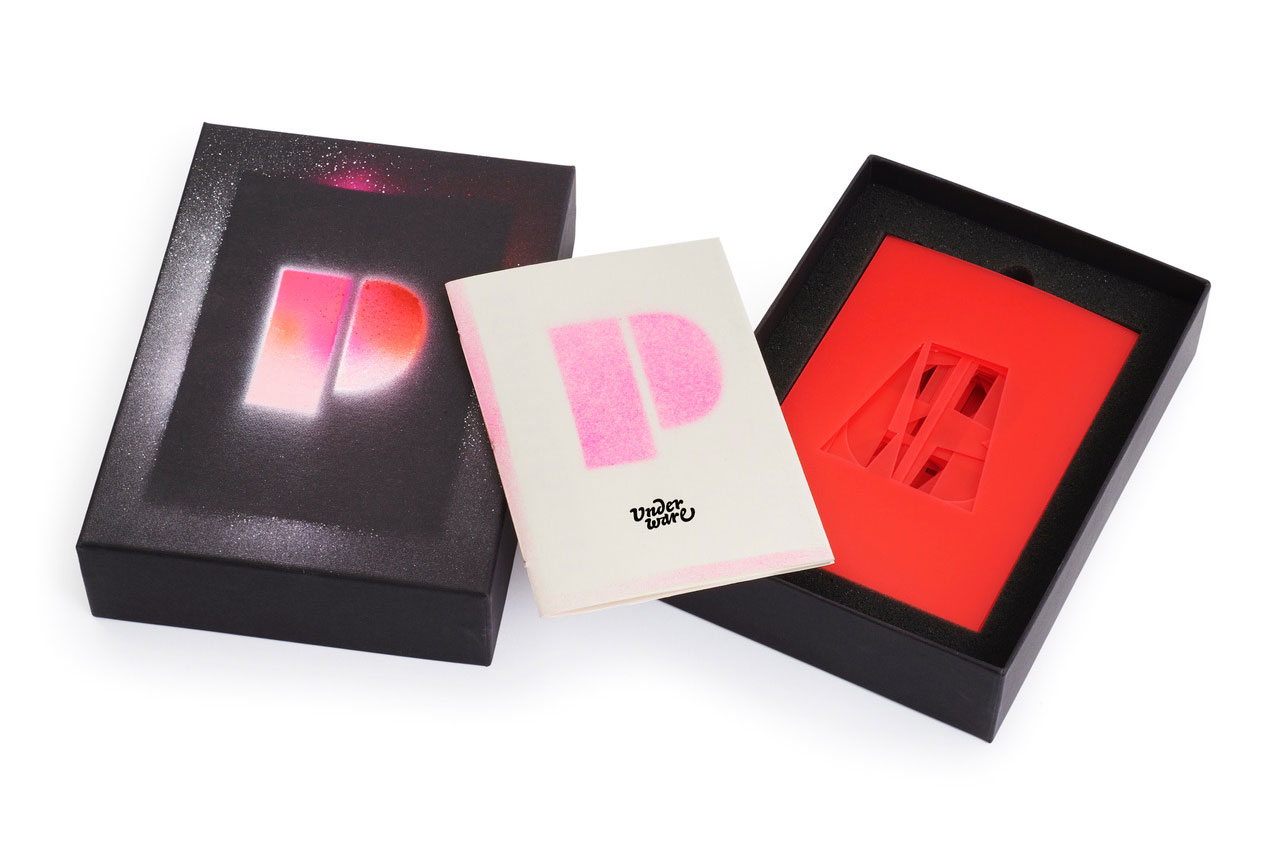 Stencils are a fantastic way of producing visuals. With Plakato you can print out your text, and just cut it out of paper, cardboard, or any other material you prefer. Get your spray can, paint, brushes or any other tool you prefer. We always prefer spray cans because they are the fastest way to write a text with a stencil. Last week, for example, we hand-sprayed all the posters for the BuitenBios, the open-air cinema on the roof terrace of our Amsterdam studio, in Plakato style. Those posters used a custom-made stencil, but sometimes you just want to put your own message on something quickly. Prefabricated stencil letters are perfect for that. 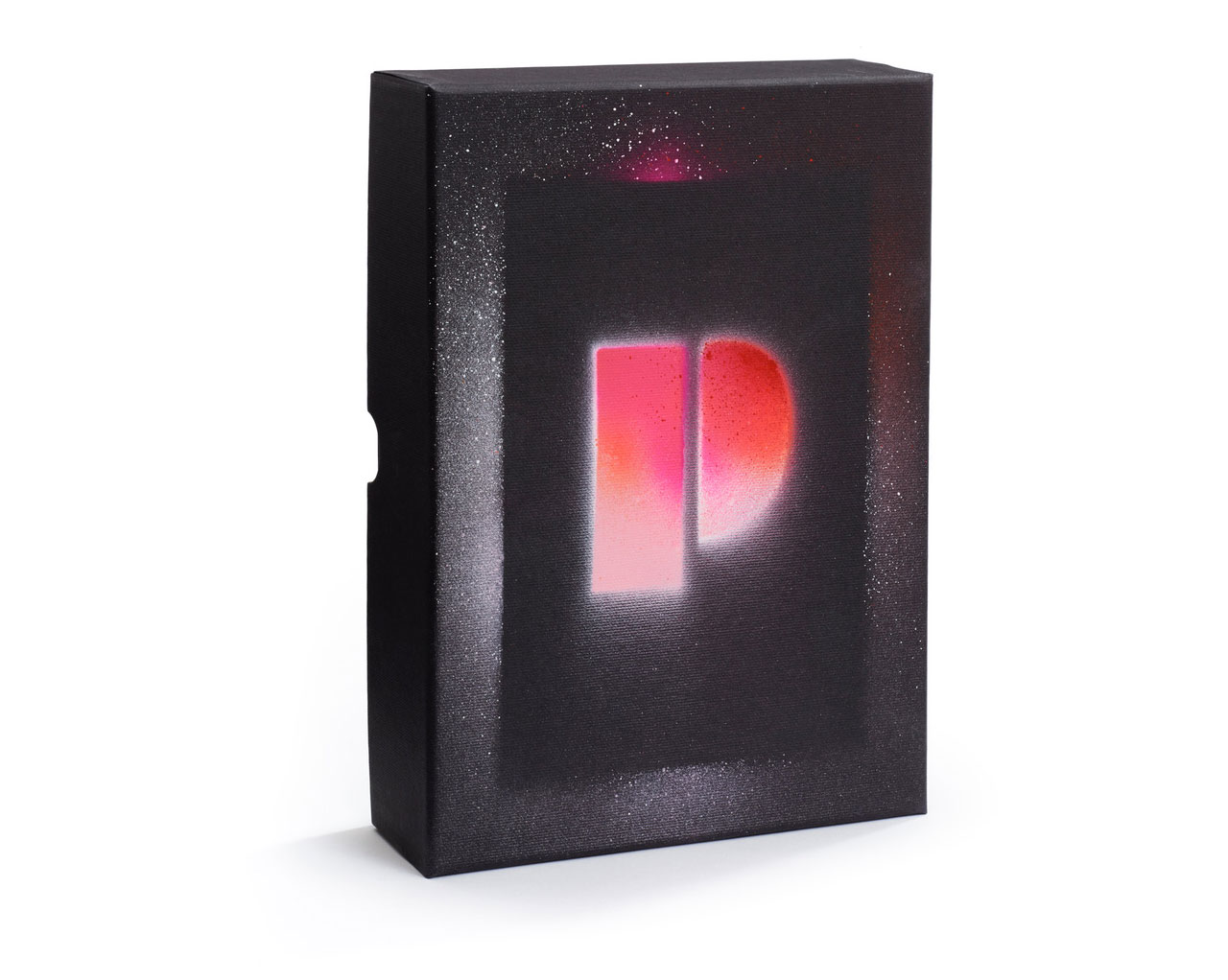 That is why we are pleased to present the Plakato Stencil Set today. It is a physical type specimen and utensil in one. This stencil set, consisting of 40 separate stencils (A-Z 0-9 & ? ! ↑), comes in a customized box and is accompanied by a dedicated booklet in Plakato style. The booklet has a simple message: get your hands dirty and don’t let this stencil set become your typographic Japanese Senseo machine. The pamphlet stitched booklet, which is RISO printed, and the Plakato stencils are packed together in a sturdy box, and now available for a bargain. Spread your message in style with the Plakato stencil set! 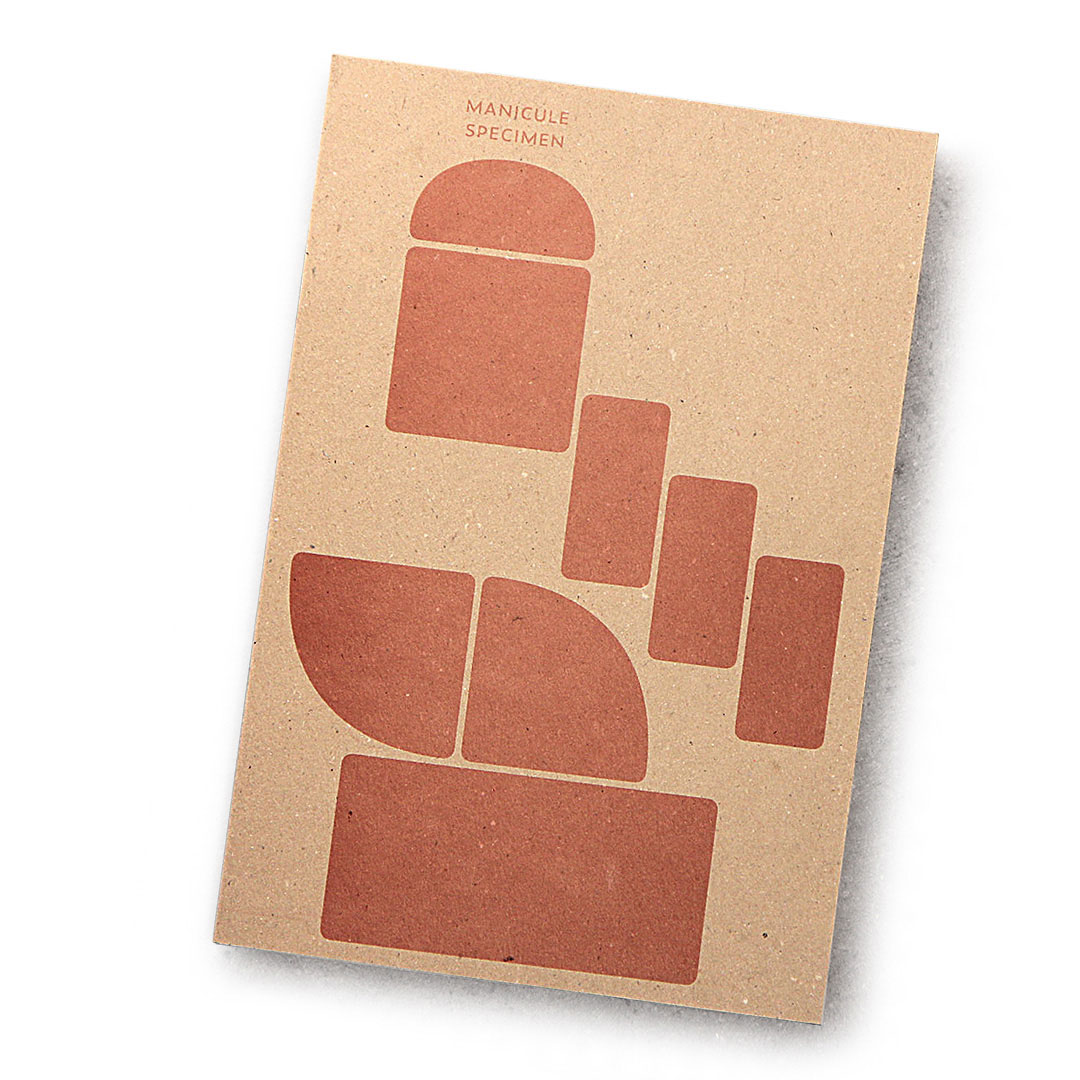 It’s been a well-kept secret, but we often design specific 👉 manicules to fit the style of a typeface and include those in our fonts. Those pointing hands are the subject of a small publication.

This month we hooked up with publishing house De Buitenkant, drukkerij Jan de Jong & zetterij Chang Chi Lan-Ying, for a Copper Monday print (a Dutch printing tradition) and made a Manicule specimen (Dutch title is ‘Handjesproef’ 😘).

This illustrated essay on the manicule, which briefly tells its transition from the margins of 12th century books up to the vaults of contemporary typefaces, brings our love for carefully designed manicules in the open. This publication is therefore not a type specimen, but rather a manicule specimen, in which each manicule is presented in combination with the typeface to which it belongs.

This publication is not for sale, but if you want to obtain a copy, join our raffle.

03 december 2021 — publications
The dynamification of typography

Because Plakato, our latest font release, consists of a set of static as well as a collection of dynamic fonts, this is a suitable moment to reflect on changes in the practice of a type designer. Accompanied with videos of dynamic versions of Plakato, this case study touches the question if the dynamics of a design should be defined by the user or by its creator, and what it means that type became dynamic.

Read the case study: The dynamification of typography. 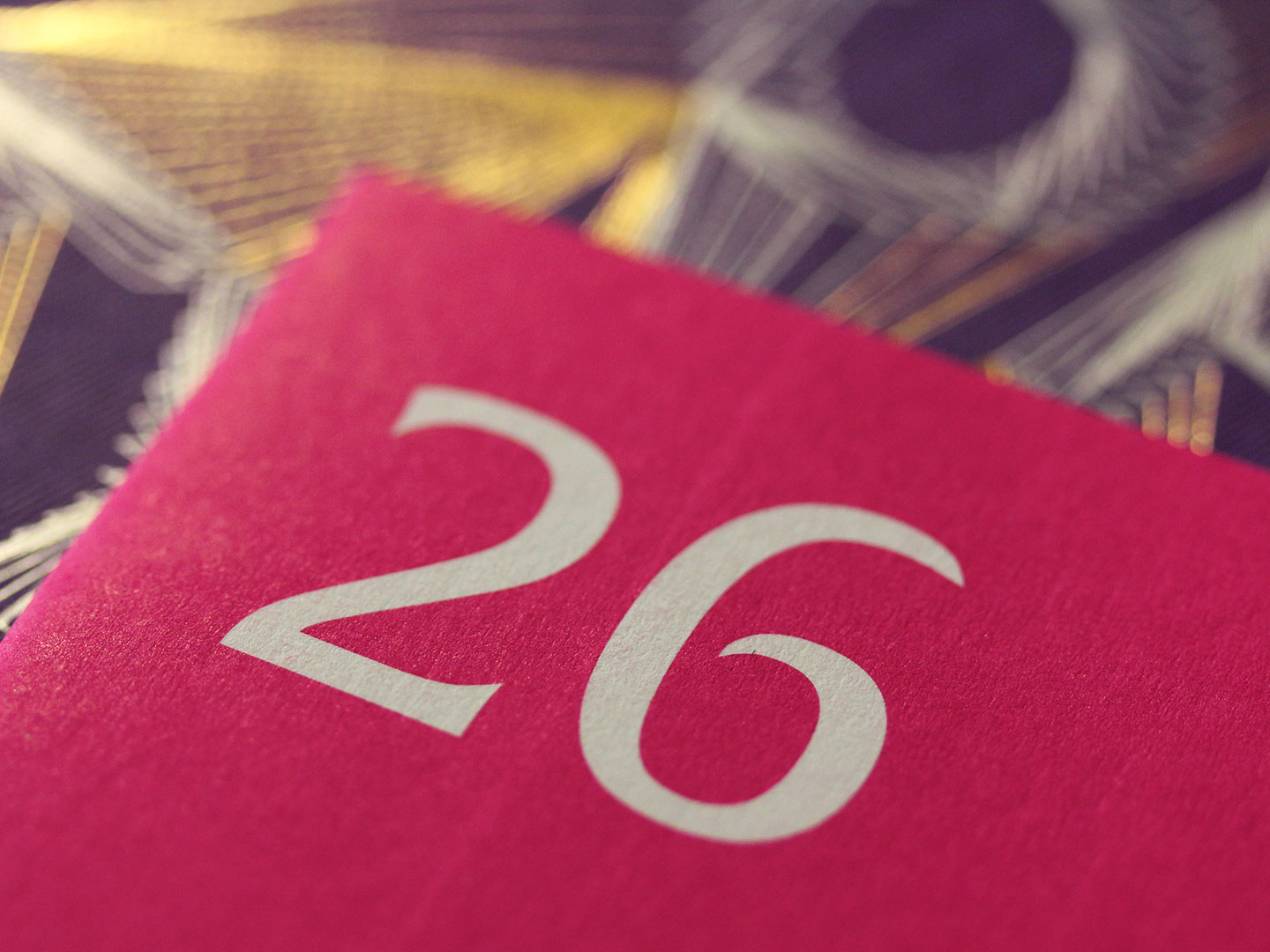 The publication 26 is a speculative 26th chapter of the book Theory of Type Design by Gerard Unger (22 Jan 1942-23 Nov 2018). Despite that the number 26 will always remain a benchmark in the Latin type world, Unger’s book about those Latin letters only consists out of 25 chapters. As Gerry Leonidas describes it in his foreword, Unger’s book “offers a reference point for the design community to respond to, and, not least, for other authors to contribute further.” So did Gerard Unger deliberately not include a 26th chapter? Is this book actually a request for other type designers to respond to? Can Unger’s choice for writing 25 chapters be regarded as an open invitation for anybody to write their own version of the missing 26th chapter themselves? We hope to read many 26th chapters by other type designers in the future, which will keep Unger’s spirit of writing on type design alive. Bring on the responses. Our 26th chapter is this publication.

The text in this publication is an elaboration of the talk Underware held during the book presentation on 6 September 2018 at the Nieuwe Instituut in Rotterdam. 26 was written and published by Underware on the occasion of TypeAmsterdam 2019.

Win a free copy!
We’re giving away 26 copies of the publication 26. For free! And we really mean “free” as in free. No hidden meanings, which is almost an exception these days. We’ll randomly pick 26 addresses from those who apply, and then we’ll ship the publication for free. This publication is not for sale. With other words: this is your only chance.

If you want to participate in this raffle and win a free copy of this publication, make sure you send your name & full postal address before 22 November 2019 to info@underware.nl and mention “I wanna win 26!”. Winners will be notified before 1 December. 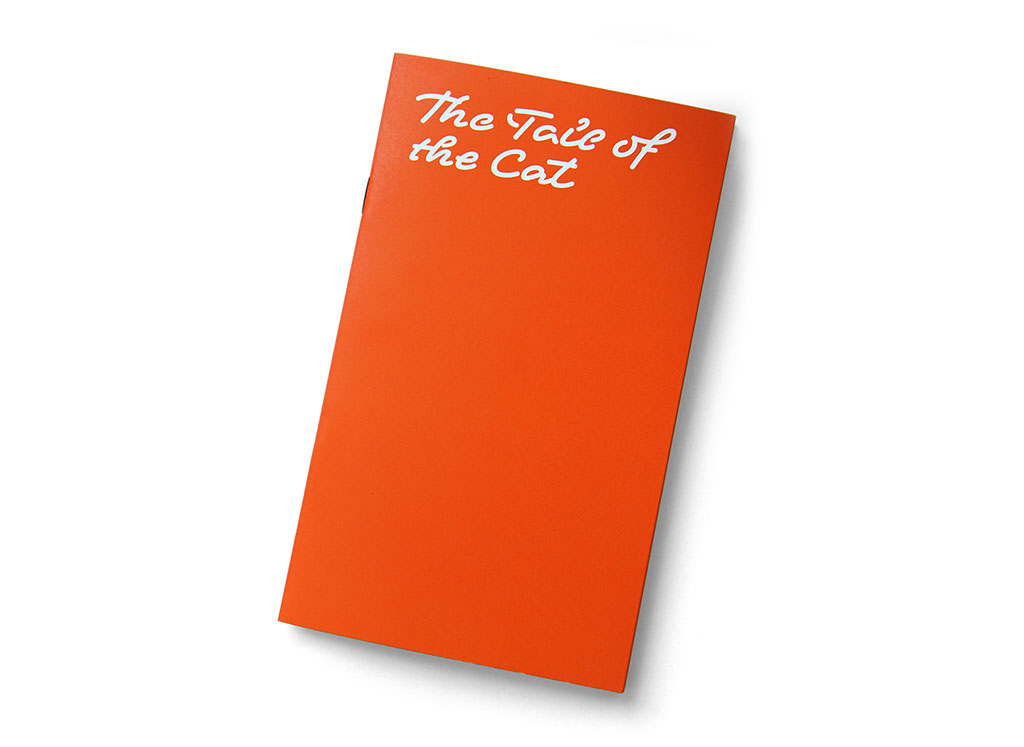 Written words always exist within the three dimensions of the maker (the type designer), the user (the designer) and the consumer (the reader). But what does it mean to be a type-maker, -user or -consumer? How is language working anyway? Together with Dutch composer Jacq Palinckx and writer Kees ’t Hart, we investigated into an expanded understanding of typography. Attendees of our lecture at the TYPO Berlin conference last Saturday, could afterwards continue to observe language with the publication The Tail of the Cat.

18 may 2018 — publications
Ten Commandments of Type 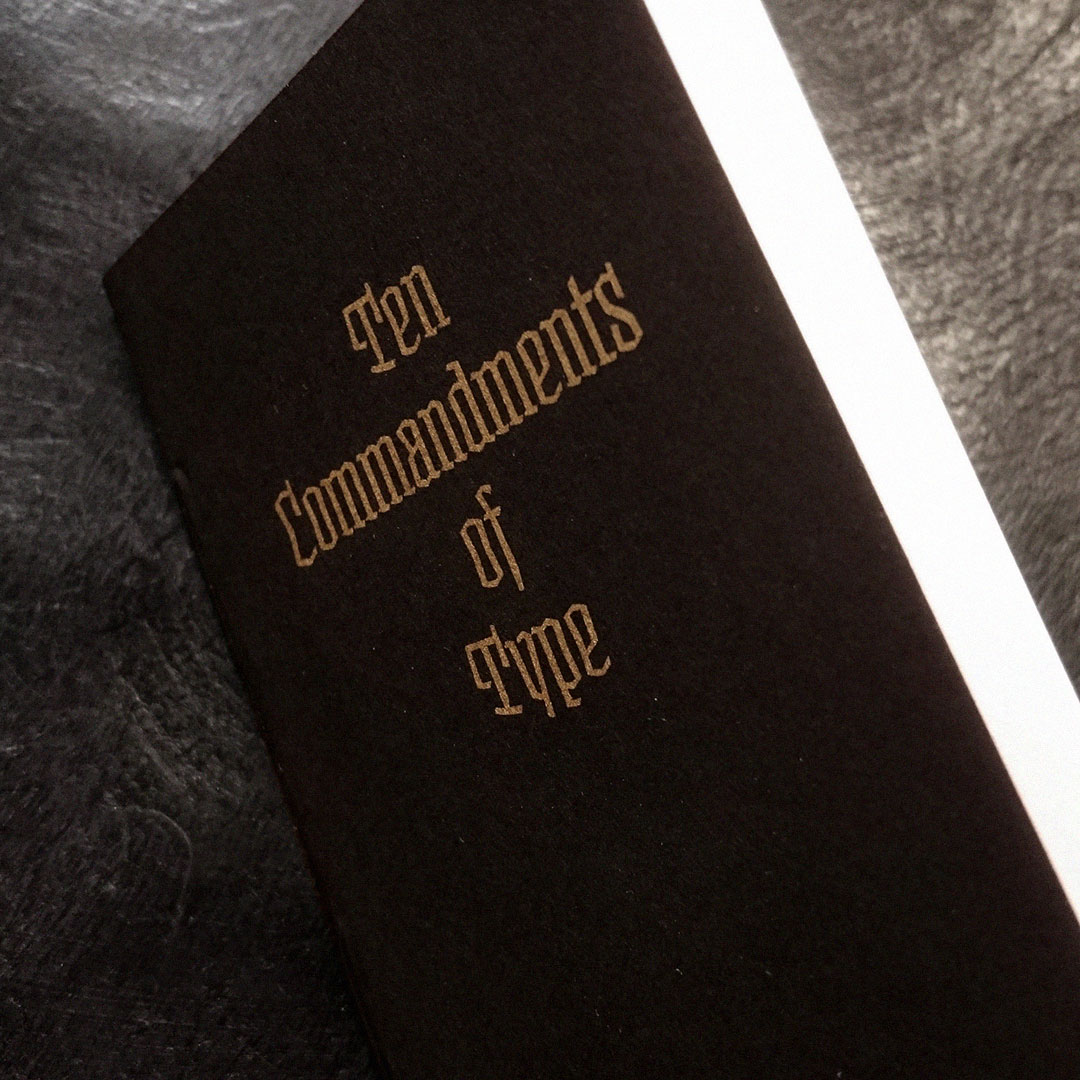 Do we still have shared beliefs? Last Sunday we gave a lecture at the All Eyes on Type Festival in Rotterdam. What to do on this very early Sunday morning, at a time when people used to go to church? We’re happy to see that it’s still possible to bring people together on Sunday morning. People who have shared beliefs and get together, luckily that still exists. So we were all in Rotterdam that day to celebrate type. Because all attendants belief in type. In a time when hand lettering became more popular than other religions, it’s important to reflect on the craft of making letters, and think about what we are actually doing. That Sunday we wanted to share some thoughts on how to communicate. Some thoughts on making letters. This service is a story in which we worked towards the ultimate celebration of type. Towards the end, everybody, every individual, received his own sacred typographic host. Because this is the only true way to celebrate something you, us, we all believe in. It became a service which was taking of with live organ music, and ended with a sacred host in the form of a tiny printed publication: Ten Commandments of Type. 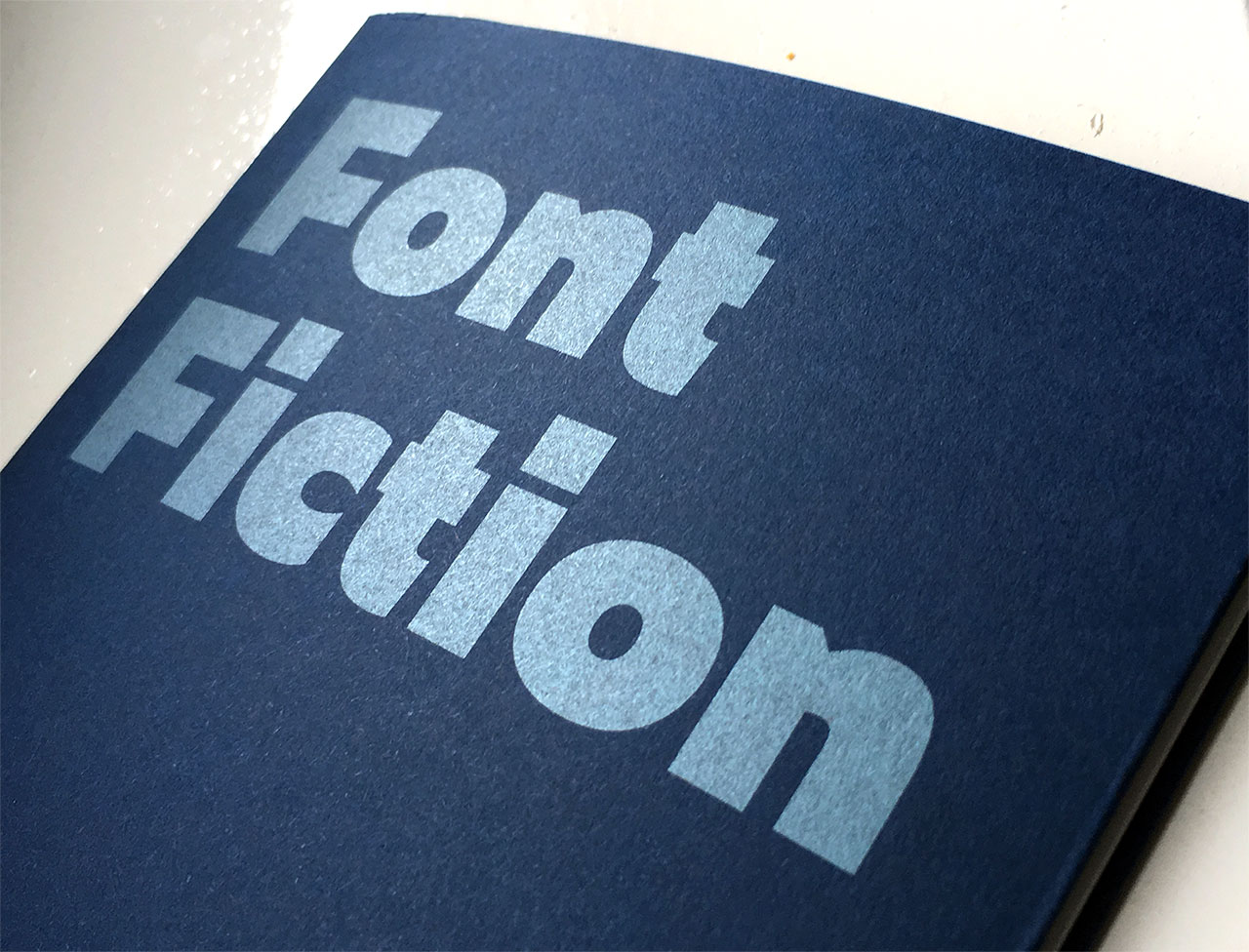 Ladies and gentlemen, may we introduce Font Fiction, tomorrow’s fonts designed today. Visitors of the TYPO Labs 2018 conference in Berlin received a – pretty future-proof – printed copy of this manifesto. The rest of the world can read it online at fontfiction.com. 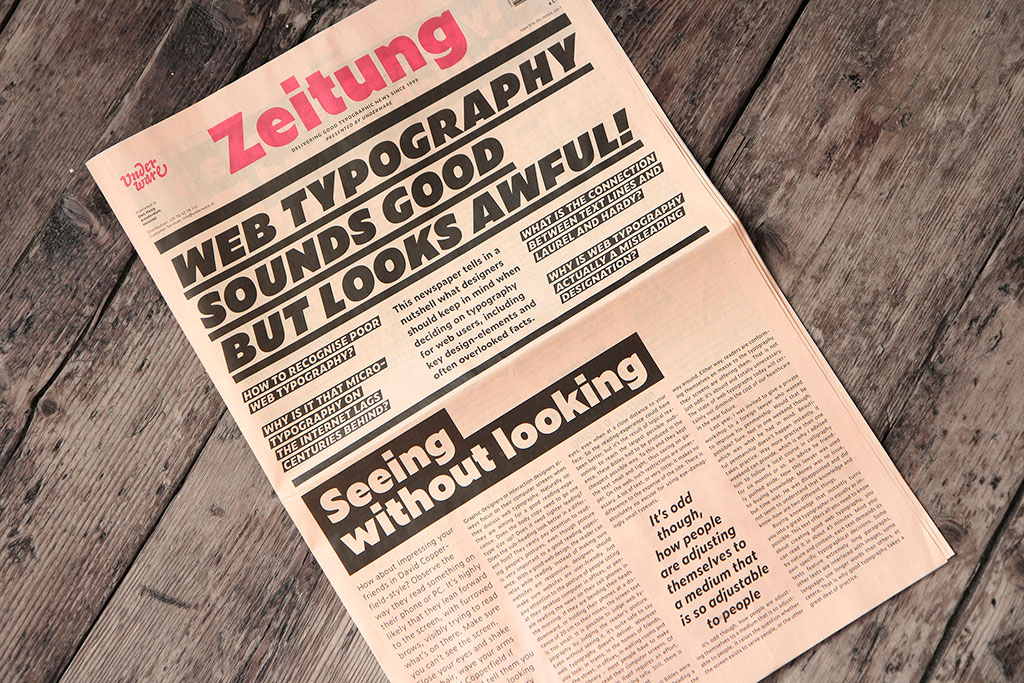 We’re happy to announce the latest news on web typography. Every wondered how to recognise poor web typography? Why is it that micro-typography on the Internet lags centuries behind? What is the connection between text lines and Laurel & Hardy? Why is web typography actually a misleading designation? This newspaper tells in a nutshell what designers should keep in mind when deciding on typography for web users, including key design-elements and often overlooked facts.

24 pages full of typographic wisdom and experiments. Everybody who designs for screens should read why web typography sounds good, but looks awful, so get your own Zeitung newspaper. 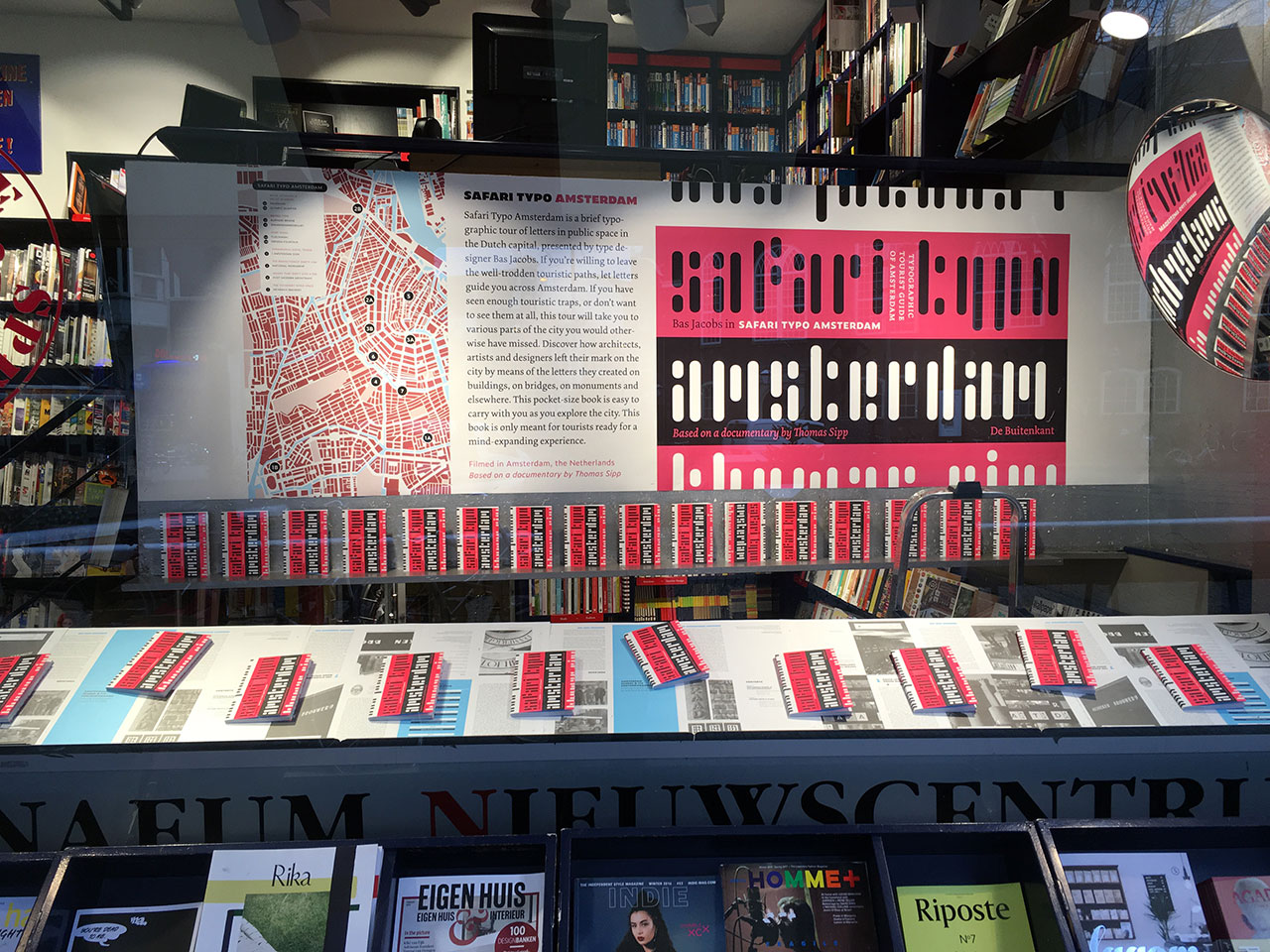 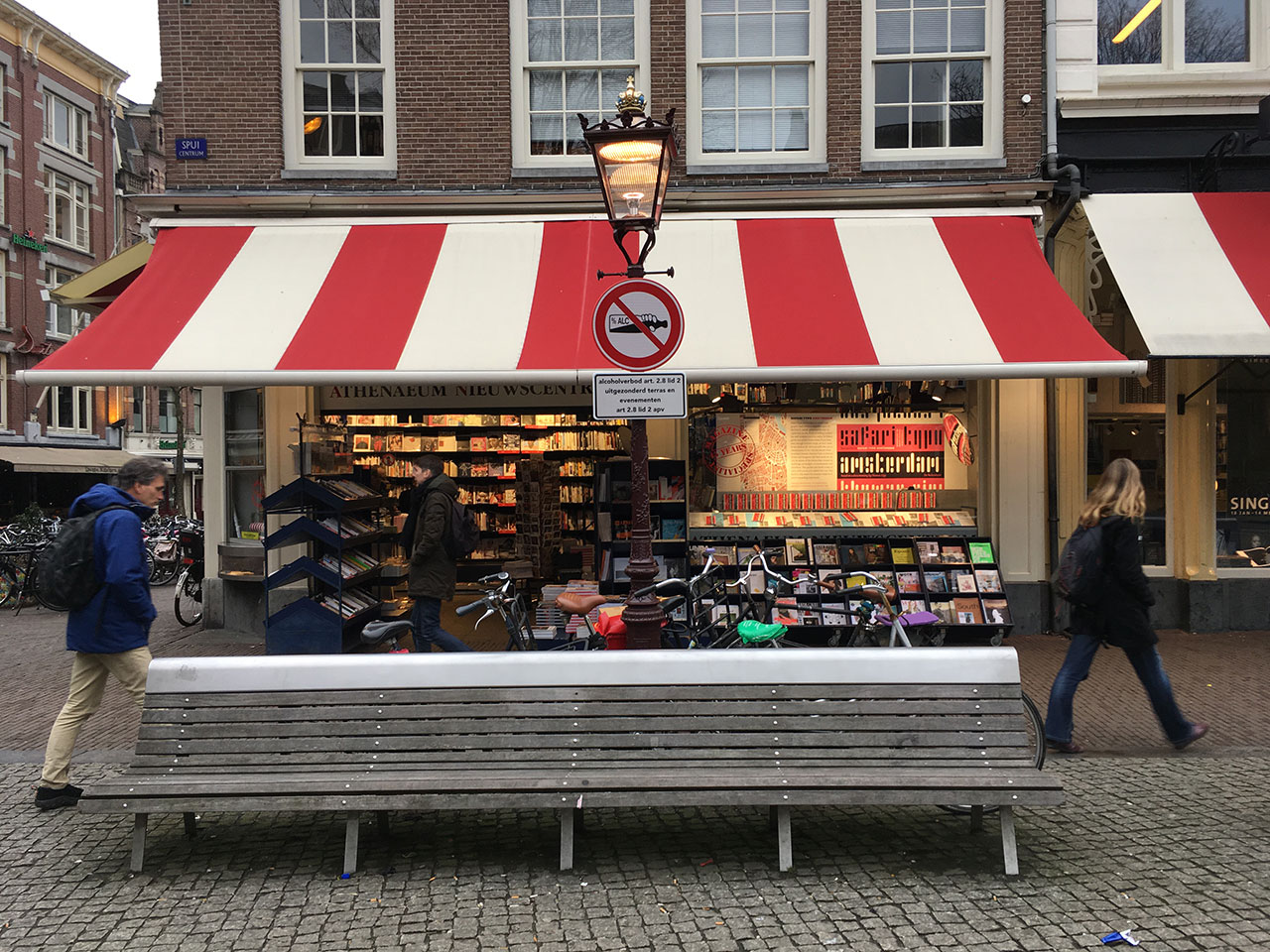 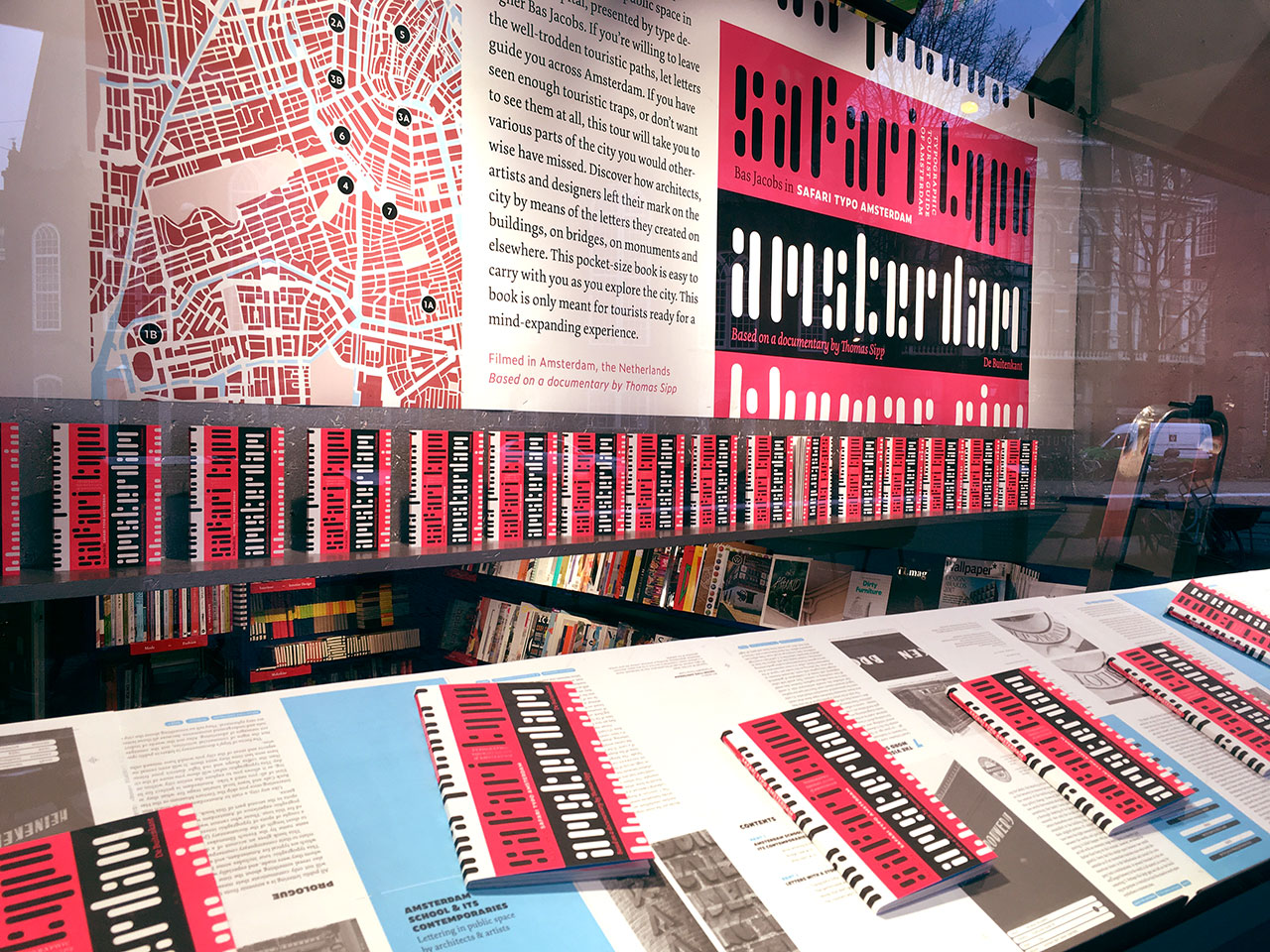 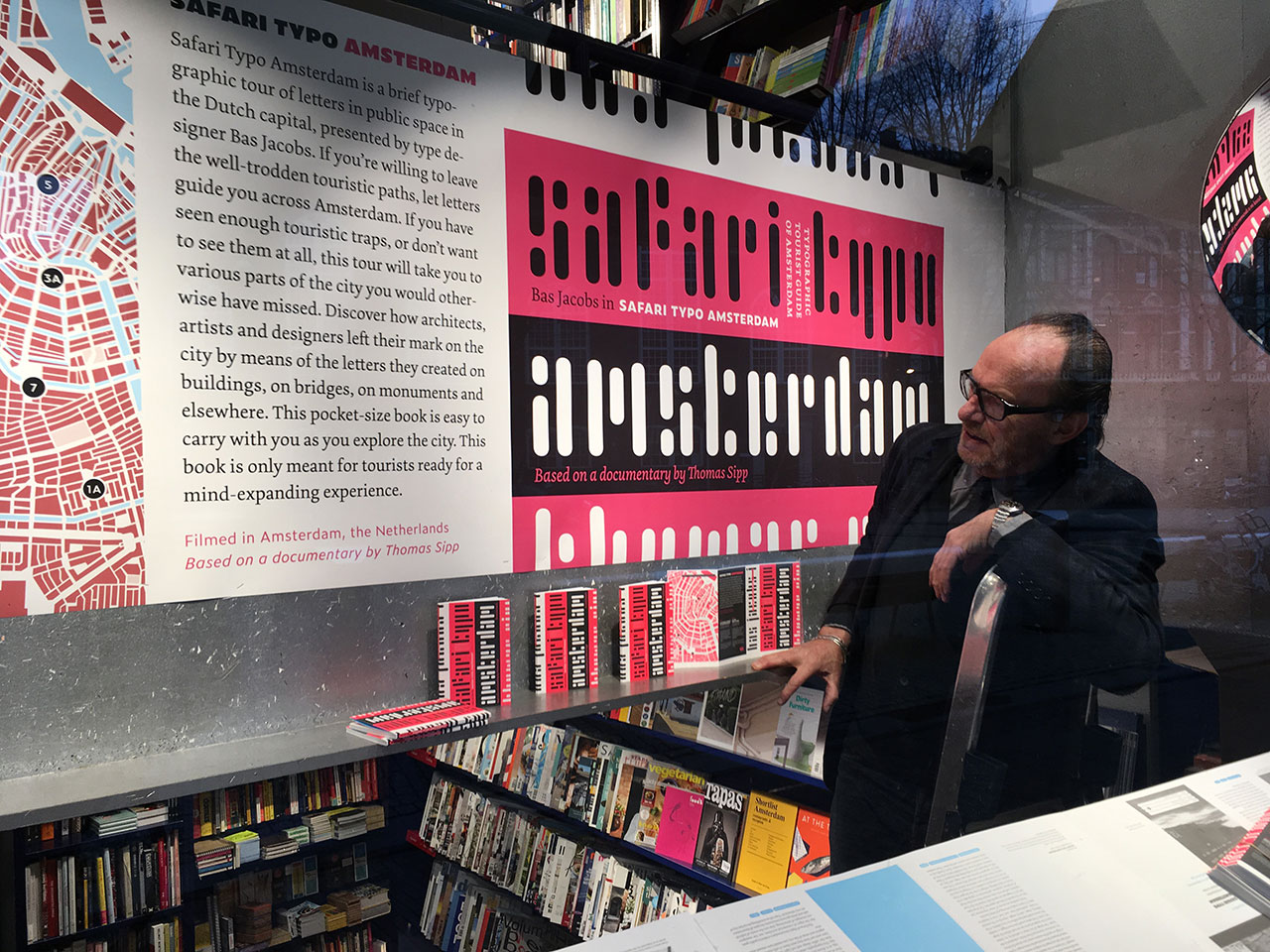 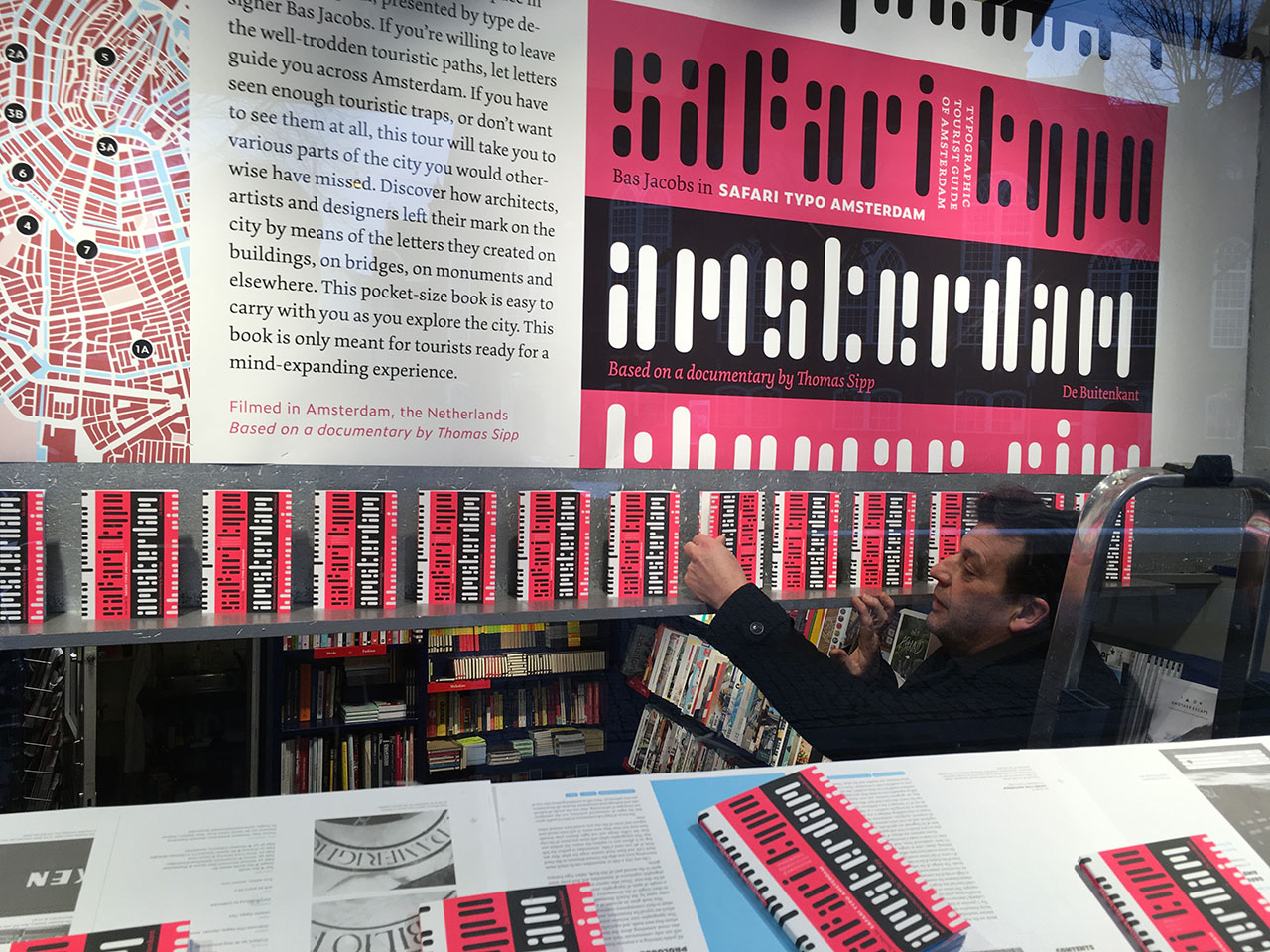 The new Safari Typo Amsterdam publication is currently on display in the Athenaeum bookstore at Spui square, right in the middle of the heart of the middle of the city centre. So very very very central in Amsterdam. It’s very touristic there as well, a perfect location to display a tourist guide. We love shop windows. We really do. In case you question this, no need to Google that, just search for shop window on this site. Tourists can now expand their mind by exploring the typographic side of the Dutch capital. This 50-year old legendary bookshop is a nice starting point. Safari Typo Amsterdam is a brief typographic tour of letters in public space in the Dutch capital, presented by type designer Bas Jacobs. If you’re willing to leave the well-trodden touristic paths, let letters guide you across Amsterdam. If you have seen enough touristic traps, or don’t want to see them at all, this tour will take you to various parts of the city you would otherwise have missed. Discover how architects, artists and designers left their mark on the city by means of the letters they created on buildings, on bridges, on monuments and elsewhere. This pocket-size book is easy to carry with you as you explore the city. This book is only meant for tourists ready for a mind-expanding experience.

Filmed in Amsterdam, the Netherlands
Based on a documentary by Thomas Sipp How did architects leave their typographic mark on the city during the interbellum period, and how do contemporary architects and designers respond to this? Featuring letter forms by Piet Kramer, Martijn Sandberg, Reinoud Oudshoorn, Anton Kurvers, Janno Hahn, Hijman Louis de Jong & Rene Knip. Part 2: Letters with a story
The extravaganza uncensored tour

Can letters tell you a story which you cannot directly read from the letters themselves? The stories behind the letters are as interesting as the letter shapes themselves. This uncensored safari features letter forms by Adrian Frutiger, Jan van Krimpen, Hermann Zapf & Bert Johan Ouëndag. 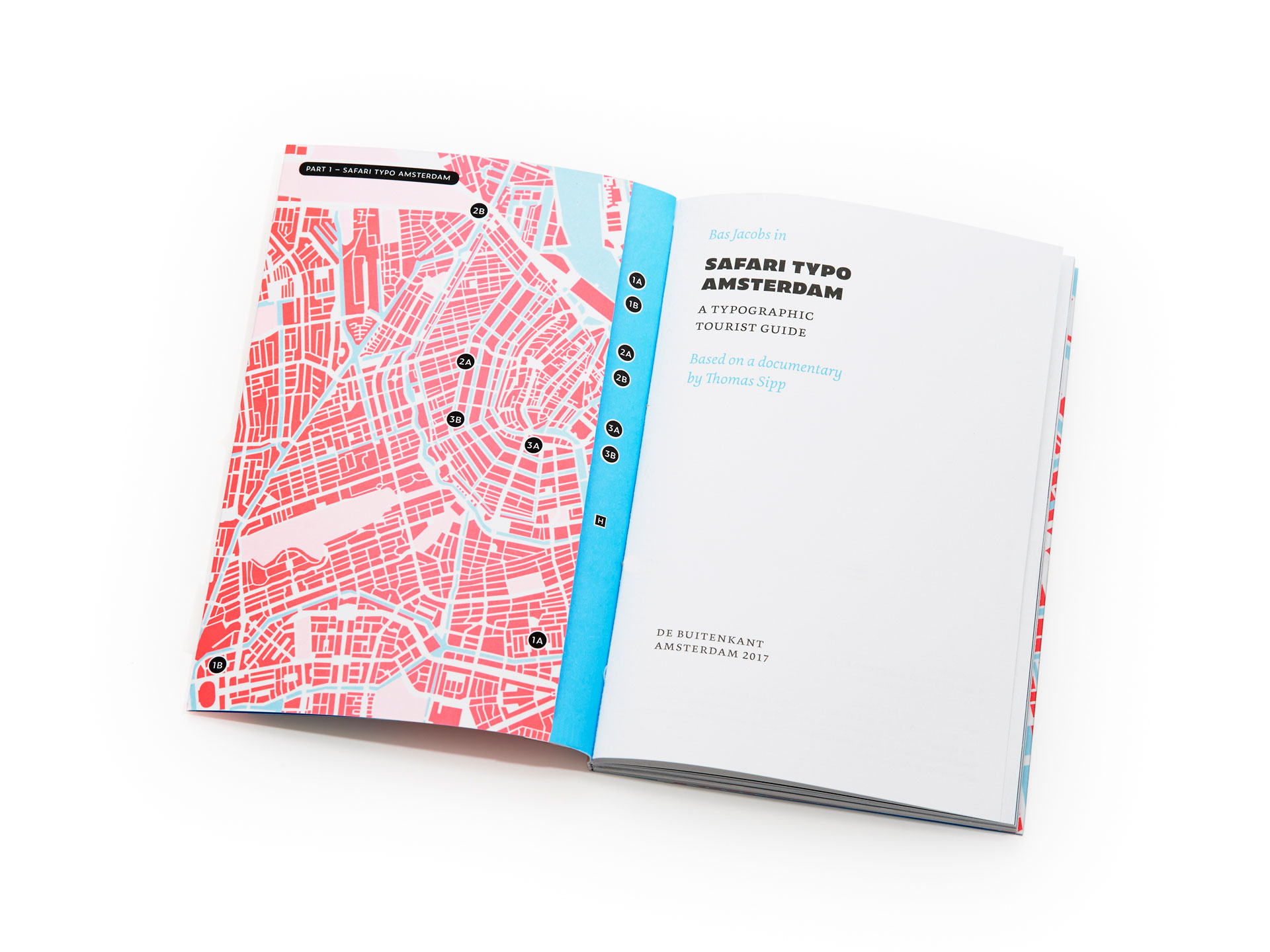 Published by De Buitenkant, and presented last Friday in Amsterdam. Bookshops have it in store from today on, but it can also be ordered online in our shop.