How often has been asked: what is design? And how often was the answer solving problems? The idea that designers are problem solvers was taught in the 90s at art academies throughout Europe. But designers should not just be looking for solutions. They should at least be looking for new solutions. So they have to come up with new ideas. But how do you come up with new ideas? Not by going from A straight to B, where B is your final destination. Just look at airline logos, how many times didn’t that end up with a bird? Countless times. They all solved their problem. Original? No. Does it work? Yes, problem solved. But is this what design should be? No.

If you compose music, you don’t just make a piece up in your mind and afterwards only execute your thoughts on a piano. The first execution is probably just the starting point. While playing your new song for the first time, something important happens. Hearing the song might bring more ideas. Better ideas. If you can already make up your final destination in advance, your journey was pretty short. Too short. Then you know for sure it’s been a conventional trip and your creative process wasn’t that creative. You don’t travel to the other side of the globe, and then say ‘ah, that’s it’ directly after your arrival, do you? This is why the motto of designers shouldn’t be: sketch. It should be: sketch, sketch, sketch. And continue sketching tomorrow. 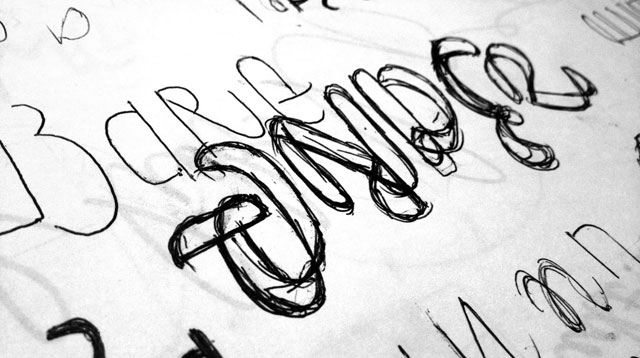 We spend a reasonable amount of time with useless activities. Playing around, sketching, doodling, building things, making impossible letters, searching beyond the extremes, just to keep our brains fresh. In first instance these activities don’t have any goal. Mostly they fail anyway. Just sometimes there is a catch, our eyes sparkle with joy followed by a soundless ‘yeaaaaah’. Sometimes such an idea ends up in our work, mostly not. Playing around with letters in any kind of way is just such a pleasure that the end result doesn’t matter. Enjoying the beauty of letters is enough LSD you need during a day.

Mozart would not only spell his name backwards, he also composed some songs which could be played backwards, ending up with exactly the same song. Think about that. Or more recently, Paul Hindernith composed Ludus Tonalis (1942), a cycle of fugues which is introduced by a praeludium and concluded by a postludium. That last part is formed by turning the praeludium upside down and therefore reading it backwards. These are two examples of crazy retrograde inversion exercises, solving problems they posed themselves. Almost a graphic approach, introducing not only symmetry but also optical illusions in music. Useless? Yes. Fun? Sure. Amazing? Definitely. LSD proxy.

And talking about putting things upside down, flipped or reversed: sometimes it becomes confusing what things really are. Artist Jeroen Offermans learned himself how to sing Led Zeppelin’s Stairway to Heaven backwards. He recorded his execution in front of St. Paul’s cathedral in London, which must have sounded like a stoned Ursonate. That recording was again reversed, turning the song back to its original order. But everything else in the movie has the opposite direction, therefore you’ll see people walking backwards. The idea of singing the song backwards was primed by rumours in the 60s and 70s that rock songs would influence your inner space if they were played backwards. Some songs would then contain secret messages, the myth went. Stairway to heaven would encourage demonic sentiments.

Instead of thinking of a good but predictable solution while solving a problem, what if all problem-solvers would only start with this instead: ‘Just imagine…’ And then see what comes to your mind. Probably not a bird for an airline logo. How to discover something new, something personal if you only walk paved ways? Maybe it’s very human to prefer the paved ways. As soon as some ways are paved, most people prefer to walk there. Only while walking in a desert, every single person will walk his own way. But as nobody lives in a desert, it’s hard to walk around pretending there are no paved ways.

One of the consequences of walking unpaved ways is simple: failure. Where failure is often considered ‘scary’ or ‘bad’, it’s actually the opposite. Failure is essential. Every failure is one step closer to an original, innovative solution. Think how the world would look today without any failures. Better? Mmm. Different? Sure. A nice example that failing is useful are Post-Its. In 1968 chemist Spencer Silver was experimenting with various adhesives together with two of his colleagues. Accidentally they created a glue with a low-grade stickiness. As they were trying to make a stronger adhesive, they couldn’t think of a use for it and rejected this glue. It would have never been part of history if his colleague Arthur Fry wouldn’t have realized a couple of years later that this accidental, failed invention was exactly what he needed for a perfect bookmark in his hymnal. The rest is history.

What does this all have to do with type design? Maybe not that much. Imagination is unfortunately not that important in every new typeface. But a little bit more imagination isn’t too much asked, is it? Sometimes we combine our fascination for letters with our love for ambigrams. Inspired by the brilliant New Man logo, designed by Raymond Loewy in 1968, we went ahead and did it all over again with our own name. Is that possible? Probably not, but it’s definitely irresistible to try. 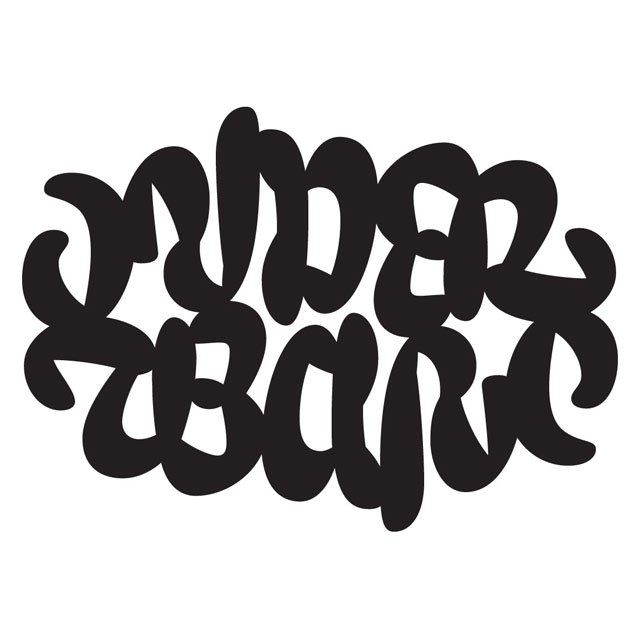 The ambigram we’re sketching here is somehow similar to what Mozart created with his Duet fur Zwei Violinen. A duet where the music lays on a table, every violin player on each side of the table. One player starts to play right-side-up, while the other musician plays upside down simultaneously. The sheet is playable from two sides. If you turn the paper 180°, the music stays exactly the same. Useless? Probably. Crazy? Yes, yes, LSD proxy. 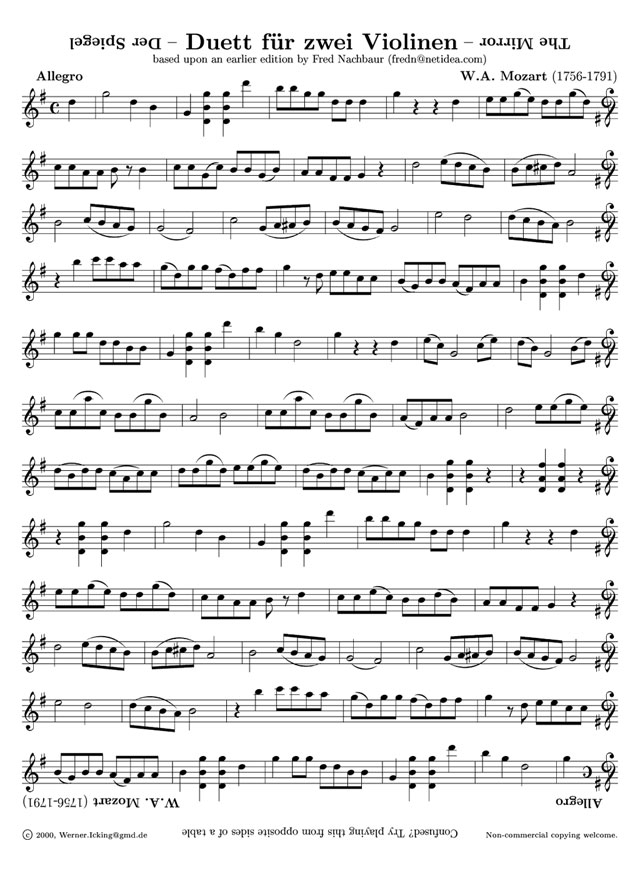 Didn’t we just say that it’s good to start every project by completing the sentence ‘Just imagine…’? Right. Also with ambigrams. Just imagine an ambigram which contains an optical illusion. Or just imagine an ambigram which is 3D. Or both. As we also have a lifelong fascination for 3D drawings, we tried to raise the bar for ourselves by adding a third as well as a fourth element: not only an ambigram build with sharp, strong shapes, but also 3D and also including at least one optical illusion. All combined in one single drawing. An impossible quartet? Likely. Irresistible? Yes. 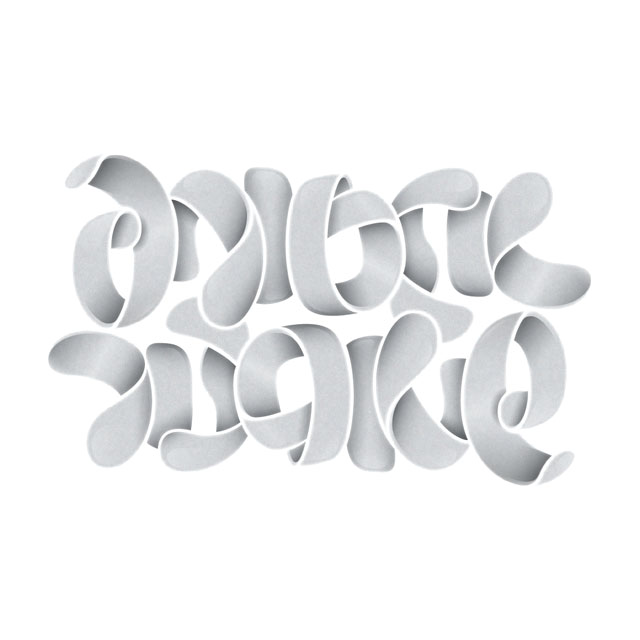 After showing this sketch to some strangers, and asking them what they thought the text read, most people answered something like: “Euhm, the first letter is… probably an ‘a’, the second letter… euhm… ‘s’, then comes a ‘q’, euhm”. Well, it became quickly clear that we totally failed. Or maybe it’s just not possible to have our own name as a 3D ambigram? We’re not the kind of types who give up quickly, so here is one of many other attempts. 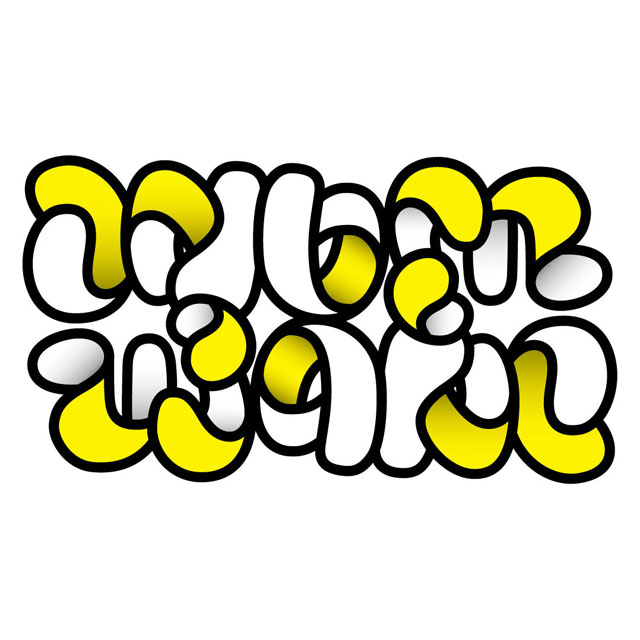 Unreadable? Pretty much. Because it looks more like a bunch of festoons after a party, this lettering remains an insider-only. So okay, we failed. So what? Although we of course secretly hope for a Post-It scenario in the future, we still offered ourselves a nice treat: time for creating useless things, enjoying the beauty of letterforms and firing up our imagination. Imagination is for free. It doesn’t cost anything, and it will improve so many things. Or maybe this is just the beginning? Shouldn’t we actually try making an ambigram which changes meaning once it’s turned 90° as well as 270°? With other words: once you think you’re there, you realize the journey has just started. If people ask us what design is, we will never answer ‘solving problems’. Because design ≠ solving problems. Design = looking for new problems.